Sullivan’s Gulch could be a mostly car-free neighborhood.  It was platted at a time when there were no cars.  The terrain is relatively flat.  It has an excellent pedestrian framework.  All residences are within easy walking and biking distance to the Central City and neighborhood service districts. A major off-street bike trail is envisioned within Sullivan’s Gulch. The neighborhood has excellent transit service. High frequency east/west bus service is in place on NE Broadway/Weidler. A new north/south bus route is planned from Sellwood to the Dekum Triangle. The MAX light rail station at Holladay Park is within walking distance.

Safety concerns impede greater bike and pedestrian use. Portland’s Vision Zero initiative revealed that the NE Broadway corridor has the #1 crash rate for bikes, the #5 crash rate for pedestrians, and the #14 crash rate for automobiles.  Crossing improvements and speed control measures are need to make walking and biking to neighborhood destinations safer.

NE Broadway Boulevard is the neighborhood’s ‘Main Street’ but getting to Broadway on foot is challenging. The Portland Pedestrian Plan calls for crosswalk spacing not less than 350 feet in major corridors.  The block spacing in the Broadway-Weidler Corridor is >400’ between NE 17th Avenue and NE 24th Avenue. There are bus stops at NE 19th, NE 22nd and NE 24th.  None of these intersections has a crosswalk.

Traffic speed is a concern. Pedestrians are intimidated by the speed of approaching traffic on NE Broadway west of NE 24th Avenue and on Weidler between NE 21st and NE 24th Avenues.

Most neighborhood trips could be made without driving but there still is heavy reliance on cars, even for short trips.  Safer pedestrian crossings are needed on Weidler and Broadway, and on 16th, 21st, and 28th Avenues. Most sidewalks in the neighborhood are approaching 100-years old. Sidewalks on some blocks are narrow, especially Clackamas east of NE 24th Avenue. Settling has occurred with cracking and seasonal ponding.

Poor visibility is a challenge for pedestrians after sunset. Private lighting illuminates sidewalks in places but is inconsistent. Pedestrian scale lighting is needed on primary routes to help reduce car trips. 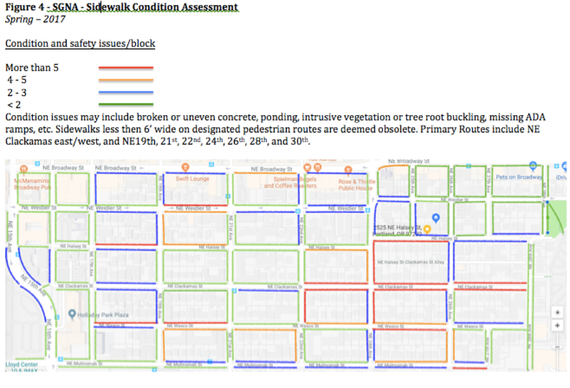 Sullivan’s Gulch is well served by bike routes but two are dangerous. The Broadway / Weidler Corridor is documented to be the most dangerous bike route in the city. This east/west route serves local and commuter bike traffic through Lloyd, Elliot, Sullivan’s Gulch, Irvington, and Grant Park.

A second concern is NE 21st Avenue between NE Broadway and NE Multnomah. This important cycling route connects the Tillamook Greenway in Irvington and the Ankeny Greenway in Kerns. 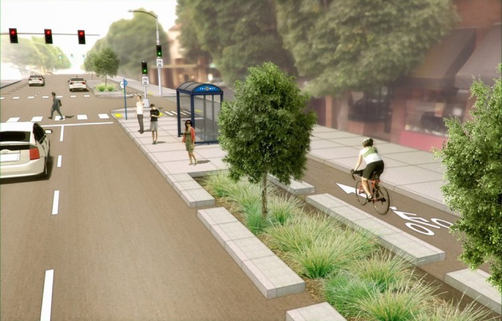 SGNA seeks to replace auto trips with bike, walking, and transit trips. To incent car-free travel in the neighborhood, the following strategies are recommended. 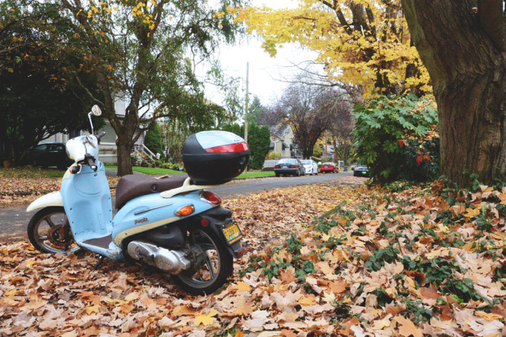 City policy to expand affordable housing allows high-density development with limited or no parking. This will impact the on-street parking supply unless more residents choose not to own cars. Commuters and construction workers who park in the neighborhood during the day affect the parking supply. 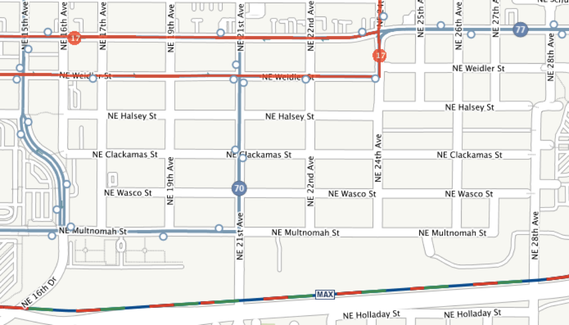 SGN favors construction of a subway through downtown beginning at portals in Sullivan’s Gulch. A subway would be less susceptible to seismic risk than the Steel Bridge. Holladay Park may be a suitable construction staging area for the subway with a station beneath the park.

The neighborhood supports a MAX station at NE 28th Avenue. This stop would not compromise travel time if a subway is built through downtown. A station at NE 28th would be next to a major shopping district serving downtown and east-side transit riders.

The existing MAX tracks in the Lloyd District should be considered for streetcar use once the subway is in service. 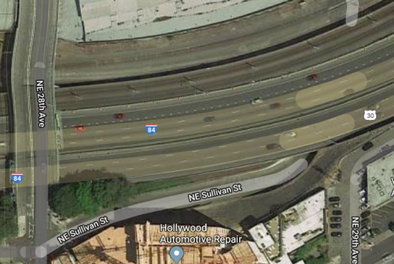